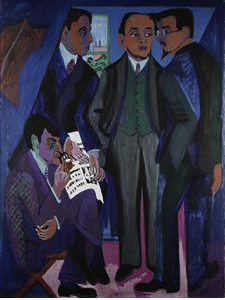 Degenerate Art: The Attack on Modern Art in Nazi Germany, 1937

I saw the exhibition this week and was speechless. I saw some of the greatest works by the most prominent artists in art history.  The show at the Neue Galerie is truly a gift to the NYC.

On March 13, 2014 Neue Galerie New York opened the exhibition "Degenerate Art: The Attack on Modern Art in Nazi Germany, 1937." This is the first major U.S. museum exhibition devoted to the infamous display of modern art by the Nazis since the 1991 presentation at the Los Angeles County Museum of Art.

The term "degenerate" was adopted by the National Socialist regime as part of its campaign against modern art. Many works branded as such by the Nazis were seized from museums and private collections. Following the showing on these works in a three-year traveling exhibition that criss-crossed Germany and Austria, most were sold, lost, or presumed destroyed. In this light, the recent discovery in Munich of the Gurlitt trove of such artwork has attracted considerable attention. The film "The Monuments Men,"directed by George Clooney, is about this amazing moment in history and shows the growing interest in the subject. 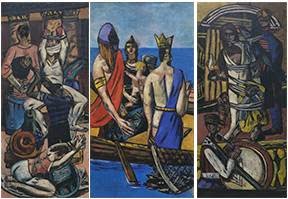 The Neue Galerie exhibition is accompanied by a fully-illustrated catalogue published by Prestel Verlag.

Posted by paulabarr.com at 7:45 PM No comments:

“Liberty Between the Towers” photograph by Paula Barr

New York – Paula Barr, a world-renown photographer known for her images of iconic New York, has licensed Collection 18 to reproduce two of her images of the World Trade Center on a silk scarves to be sold exclusively at the 9/11 Memorial Museum Retail Store.

“Lunchtime on the WTC Plaza” photograph by Paula Barr

Barr was commissioned by the Port Authority of New York and New Jersey in the late 1980s to photograph the most important images of New York City, which included the World Trade Center, The Empire State Building, The Statue of Liberty, The Bridges of New York, and more.
The first scarf is based upon a color photograph titled, “Liberty Between the Towers,” which Barr shot from an abandoned pier to capture Lady Liberty centered between the two World Trade Towers. It shows the skyline of the city on a beautiful day. The second print on a scarf is a black and white photograph called, “Lunchtime on the WTC Plaza,” depicting visitors and workers gathering on the World Trade Center’s plaza in 1986.

Posted by paulabarr.com at 5:05 PM No comments:

This scarf is a Paula Barr panoramic photograph, entitled "Liberty Between the Towers". The skyline image was taken from an abandoned pier in New Jersey in order to capture Lady Liberty precisely between the Twin Towers on a beautiful day. The 100% silk scarf measures 22 x 72 inches.

This scarf features Paula Barr's panoramic photograph, entitled "Lunchtime on the WTC Plaza," of downtown workers and visitors gathering on the World Trade Center's plaza, which sometimes served as a public space for concerts and other outdoor programs. The vast scale of the Twin Towers, the reflective surfaces and striking gothic arches created by the steel tridents inspired photographers to depict them from every perspective. Two tridents recovered from the North Tower now stand in the Museum Pavilion. The 100% silk scarf measures 22 x 72 inches.

Read more »
Posted by paulabarr.com at 8:26 AM No comments: