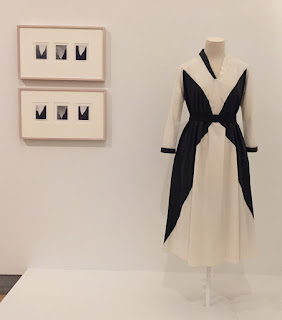 The exhibition at the Brooklyn Museum through July 23, 2017  is organized in sections that run from her early years, when O’Keeffe crafted a signature style of dress that dispensed with ornamentation; to her years in New York, in the 1920s and 1930s, when a black-and-white palette dominated much of her art and dress; and to her later years in New Mexico, where her art and clothing changed in response to the surrounding colors of the Southwestern landscape.

The final section explores the enormous role photography played in the artist’s reinvention of herself in the Southwest, when a younger generation of photographers visited her, solidifying her status as a pioneer of modernism and as a contemporary style icon.

It was an intimate visit with Georgia OK - I felt as if I was going thru her closets and shopping with Georgia at Marimekko.

Georgia O’Keeffe: Living Modern is part of A Year of Yes: Reimagining Feminism at the Brooklyn Museum, a yearlong series of exhibitions celebrating the 10th anniversary of the Elizabeth A. Sackler Center for Feminist Art.
Posted by paulabarr.com at 7:36 PM No comments: