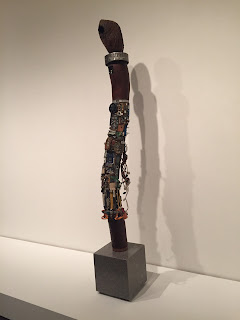 I too was raised in Alabama in the 60's. Mobile is on the Gulf Coast and south of Bessemer, and had its activism that was very grassroots.

Jack and I were friendly in the naissance of the SoHo art community. The late 1960's and early 1970's energy of creative exploration is evident in this body of Jack's work. I am ever so grateful to the Met for mounting such an intelligent and well curated show.

This exhibition presents the extraordinary and previously unknown sculptures of acclaimed American artist Jack Whitten (1939–2018). Whitten's sculptures, which he first created in New York and later at his summer home on Crete, consist of carved wood, often in combination with found materials sourced from his local environment, including bone, marble, paper, glass, nails, and fishing line. Inspired by art-historical sources rooted in Africa, the ancient Mediterranean, and the Southern United States, Whitten's sculptures not only address the themes of place, memory, family, and migration, they also give expression to a transnational, cosmopolitan perspective.

Posted by paulabarr.com at 4:29 PM